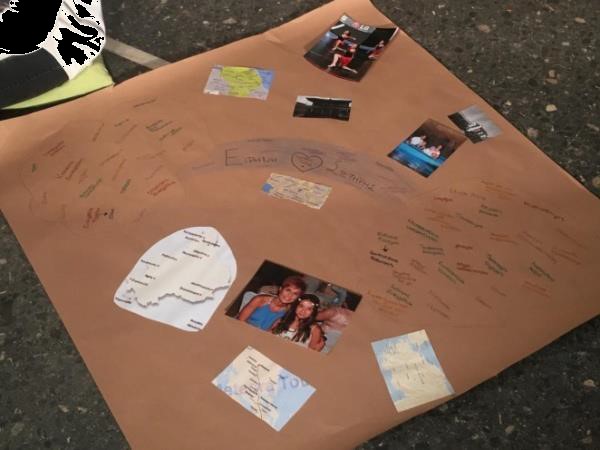 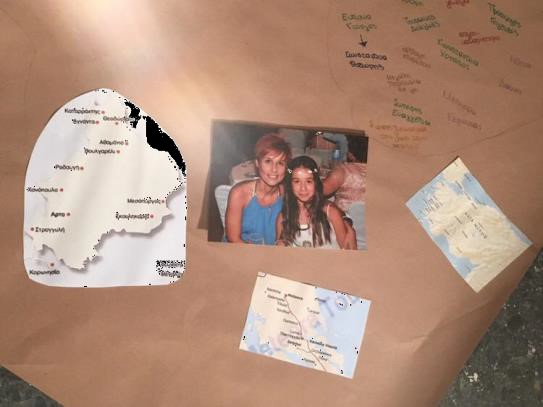 I drew two islands here, each island depicting a side of my family. One island corresponds to the family of my mother and the other to that of my father. In the middle, I drew a bridge, which represents my parents, my brother and myself. On each island I wrote some local features and areas.

On my mum’s side, we can see that her parents moved from Arta to Thessaly. My grandparents worked in agriculture and livestock farming.

On my dad’s side, we can see that my grandparents had difficulty in adjusting, as my grandmother comes from Kede in Asia Minor. During the events of the Asia Minor Catastrophe, she had to leave many things behind (memories, lost friends, her house, the streets of the city, precious and beloved objects), while my grandfather comes from Meteora. My grandparents on my dad’s side also worked in agriculture and livestock farming, since they had a lot of land. Then my grandparents came to Dafni, Athens, where my dad grew up. Regarding my parents, they met at Farsala, when my dad went there on vacation. Then they decided to live here, in Avlona.

A behavior that is very marked here in Avlona, I don’t know about other places, is that even if you came here 50 years ago, people will still think of you as a stranger. That is, we have been living here for 13 years and we are still considered strangers. Even old ladies, who come from somewhere else, and came here through an arranged marriage, even they are considered strangers. You can never be considered local, unless you were born here.

What my grandparents brought with them from Asia Minor: 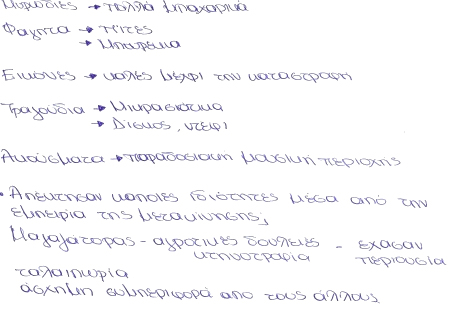 Did they acquire some qualities through the experience of moving?
Shop-owner – agricultural jobs – livestock – lost property – hassle – being treated badly by others