I was born the day of Saint Dionysis. And, since my father had an uncle called Dionysis, they named me Dionysis.

My village in Albania is split in two, as are many villages. Muslims live in the upper part of the village, and Christians live in the lower part. We are Christians. And we have good relationships with them. One of my relatives married a Muslim girl. That is, marriages are allowed. They are not fanatical about religion. Some villages have neither a church nor a mosque.

My village is close to Vlore, which is to Avlona. From Avlona in Albania, my father came to Avlona in Greece. He was the youngest. His siblings came first, and got jobs. The times were hard. They would come on foot, over the mountain, and when they got caught, they were sent back… My father came to live here, in Avlona. He loved it because it was on the mountain but close to the city, without the city hassle. Maybe it reminded him of his village, which was also like that.

My grandfather had many children. Raising them was hard. He had 8 boys and 8 girls from 2 different marriages. Most of them have left Albania. The boys are in Greece and the girls are in Italy. My other grandfather is called Stavri in Albanian and Stavros in Greek. And my great grandmother is called Alexandra, perhaps because she came from a Greek-speaking village.

Origin
I will never forget this country, because it is my homeland, my past.

Place of residence
This country is special for me. Here is where I grow up, learn things, have friends and, in general, here is where I will live and raise my children (whenever that is), whatever happens. 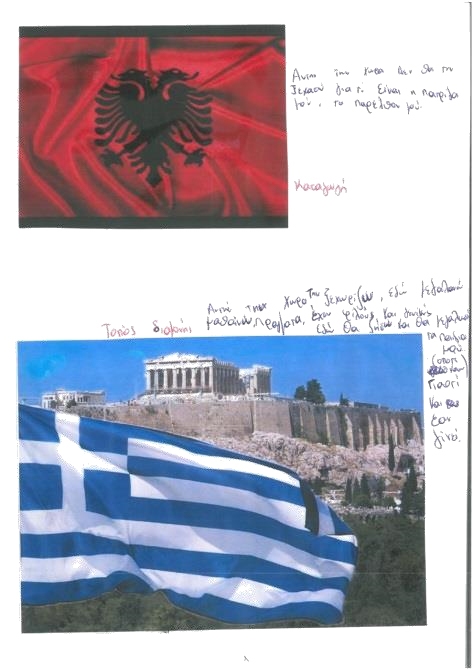 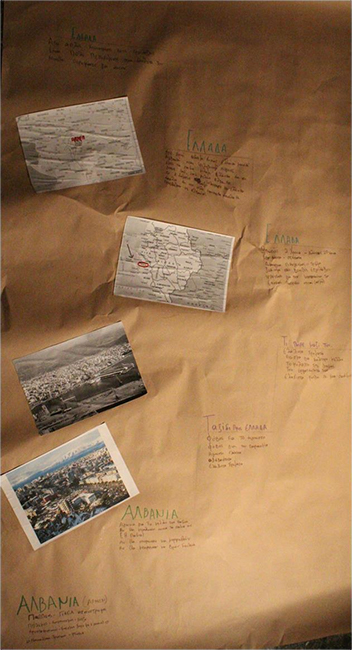 I drew these stairs, to show the difficulties faced by my grandparents, in the beginning of their life, and later by my parents, until today, when things have changed dramatically, at least compared to the beginning.

The first step is in Albania where my grandparents lived and worked as livestock farmers, during the war, in the days of Hoxha. They were Christians and lived in a village that was divided into two, with a Muslim part and a Christian part.

The third step is the journey, when my father and his brothers decided to go to Greece. The journey was a source of fear for them, as they did not know what they were going to face, they were afraid of being illegal, they did not know the language and they had little money.

The fourth step is what my father brought with him: little money, a stubbornness to ensure for a better future for us, the family that he would make here in Greece, my grandmother's talisman, hard work and some clothes in a backpack.

The fifth step is when my father came here, to Greece. At first he was in Athens, then he stayed in Oropos for a couple of years, after which he settled permanently in Avlona. The first thing he did was find a job, starting as an assistant contractor. He had a five-member family, with three children, and then he made sure he got legal documents.

The sixth step is here, today, about our life in Greece. At home we mostly listen to Greek music, while we put Albanian music when we have guests from Albania. We children speak Greek, while our parents talk to us in Albanian. The TV in one room plays in Greek, and in another room in Albanian. My father did that intentionally, so that we can get familiar with Albania, that is we learn to speak and understand what we hear.

The seventh step is my father who, from a simple animal farmer, who helped my grandparents in Albania, came to Greece, became a contractor, established his own business, and I am very proud of him as he is very successful in his work.